The Importance of Data Collection
​
By Sandy Freeman
Philip A. Giglio

One of the biggest changes noted in the rotating equipment industry in the last 10 years is the knowledge that electrical signals on the shaft of a rotating machine may pose harm.  The addition of grounding devices on pure mechanical units is a sign that industry personnel are recognizing their susceptibility to damage from electromagnetic or electrostatic sources.

As this knowledge has become increasingly more acceptable, condition monitors have appeared on the market. Monitoring parameters such as the grounding current and shaft voltage level is one indication on the health of the machine.  Constant awareness of these levels allow plants and their personnel the ability to be proactive rather than reactive to a situation.  As significant as a check engine light is on a car allowing a driver to address impending issues, monitors allow plants to take prophylactic measures to avoid a shutdown.  With millions of dollars at stake between loss of productivity and parts repair, not monitoring a critical machine is dangerous.

Are all monitors equal? Most monitors currently available will provide the voltage and current levels present on the shaft with preset alarm points.  Knowing that your voltage is increasing, for example, is a great step in keeping an eye on your unit but it is not the complete picture.   Knowing what it means and more importantly, what to do about it is vital.  Mitigating stray voltages and currents depends entirely on the source of those signals.  A good grounding system will effectively control electrostatically induced signals.  Electromagnetically induced signals on the other hand may require a thorough degaussing by experienced personnel.  So how do you know which stray currents you are experiencing?  Only by viewing the waveforms can a proper assessment be made.

A monitor that provides the user with the voltage and current measurements, alarm points AND real time wave forms can make the difference between a scheduled and an unscheduled outage.  By identifying the issue, an affective course of action can be taken as expeditiously as possible saving the plant countless losses in man hours, plant productivity and repairs.  Making sure experienced, qualified engineers evaluate the information is critical in providing the final step in the identification and corrective actions.

Magnetism is a force of attraction or repulsion that acts at a distance. It is due to a magnetic field, which is caused by moving electrically charged particles. It is also inherent in magnetic objects such as a magnet.

A magnet is an object that exhibits a strong magnetic field and will attract materials like iron to it. Magnets have two poles, called the north (N) and south (S) poles. Two magnets will be attracted by their opposite poles, and each will repel the like pole of the other magnet.

What a magnetic field actually consists of is somewhat of a mystery, but we do know it is a special property of space.

Magnetic field or lines of flux of a moving charged particle

When two magnets or magnetic objects are close to each other, there is a force that attracts the poles together.

When two magnetic objects have like poles facing each other, the magnetic force pushes them apart.


Similarities of a Bar Magnet and a Piece of Pipe

Think of a pipe as a long bar magnet.  The above illustration demonstrates what occurs when the pipe is cut.
Each cut produces a piece with a North and a South Pole, essentially a separate bar magnet.
Even if the new section is not magnetized, the magnetic flux line can cross the air gap between the pieces and magnetize a new section. 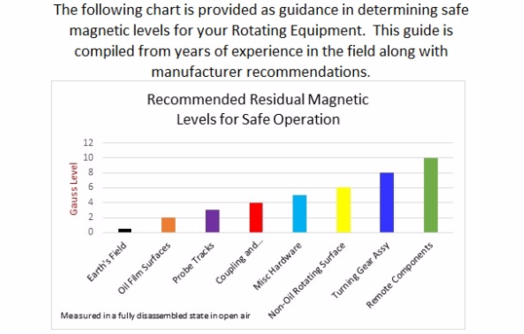